"As this is being written, Miss Sawyers has just donned the uniform of the Army Correspondent and is off for the Far East to make pictorial records of the war for Life magazine."

- From the book, Forty Illustrators and How They Work. 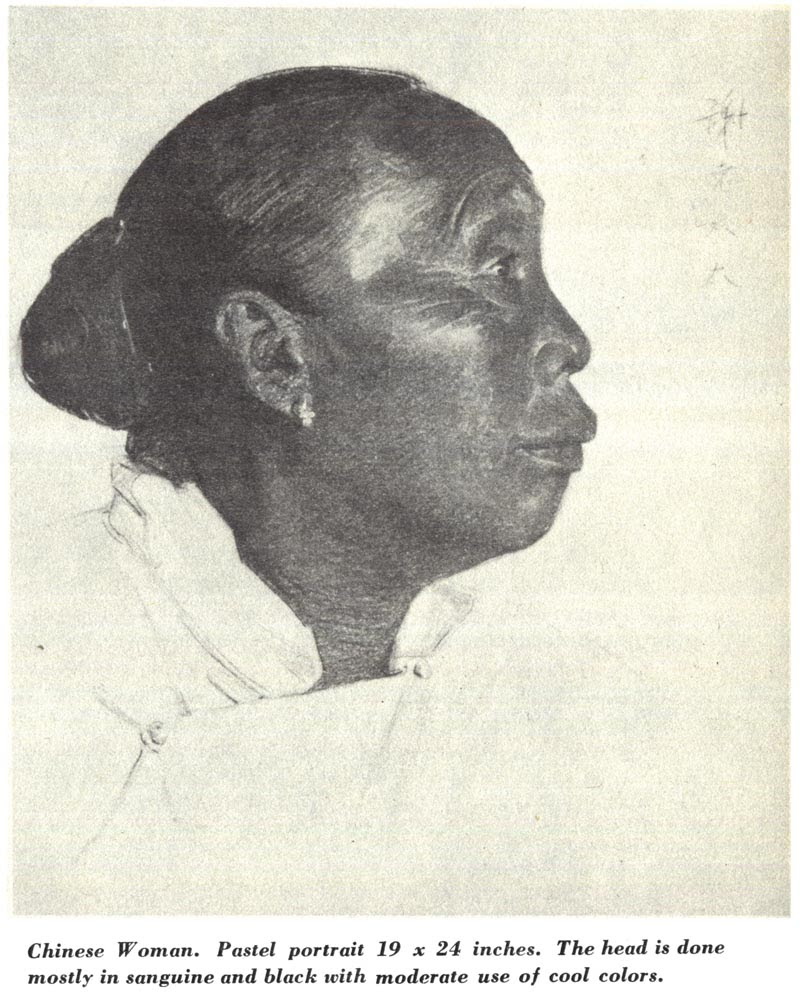 "Miss Sawyer had lived and painted in Peiping until the advancing tide of Japanese aggression had all but shut off her escape to Shanghai. Indeed, the war was raging at the Marco Polo bridge two weeks before her departure."

In the early days of the 20th century, in the tiny town in Cuero, Texas, a young girl read a book called "Religion of the Far East." That book, filled with pictures of exotic people and places and stories of peculiar ceremonies would so profoundly influence the young girl that she decided to one day go experience those fascinating lands for herself. 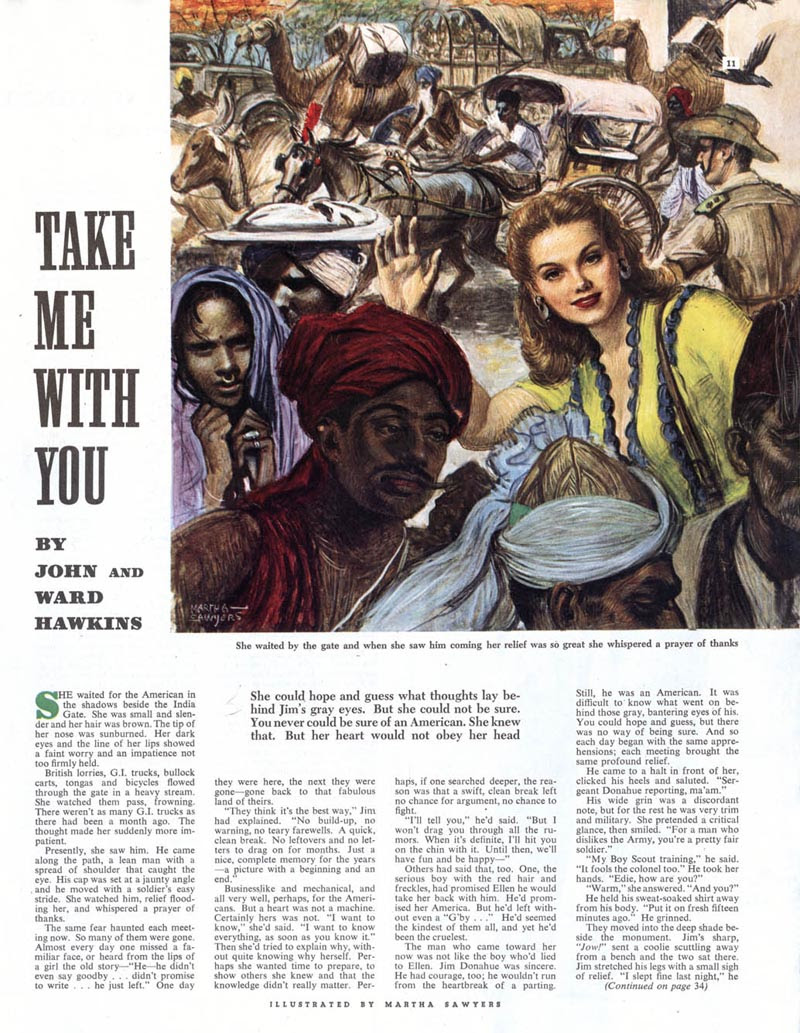 That young Texan girl was named Martha Sawyers and before she was done she had drawn and painted her way through "Paris, Bali, Penang, Singapore, Sumatra, Java, Hong Kong, Shanghai and Peiping," according to her article in Forty Illustrators and How They Work. 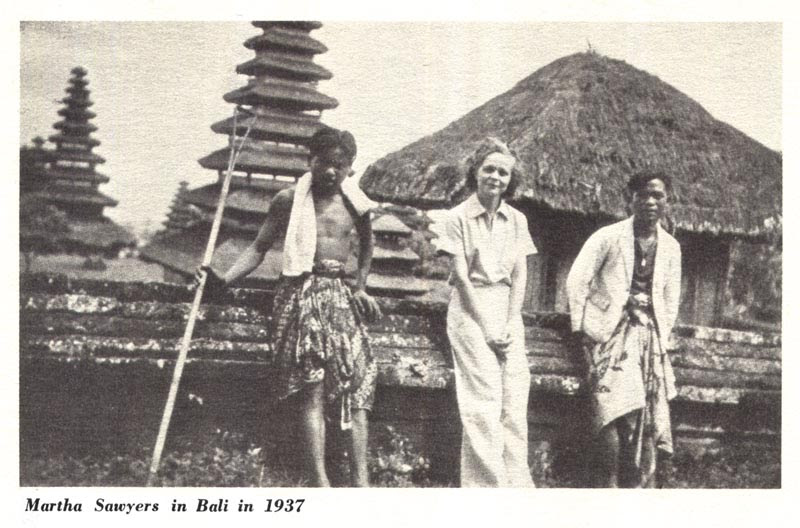 When she and illustrator husband, William Ruesswig, returned to America in 1937, Sawyers had a show of her artworks at the Marie Sterner Galleries. Collier's magazine art editor, Bill Chessman happened to see her exhibition and (as luck would have it) was in need of an illustrator with a solid understanding of Asian cultures. 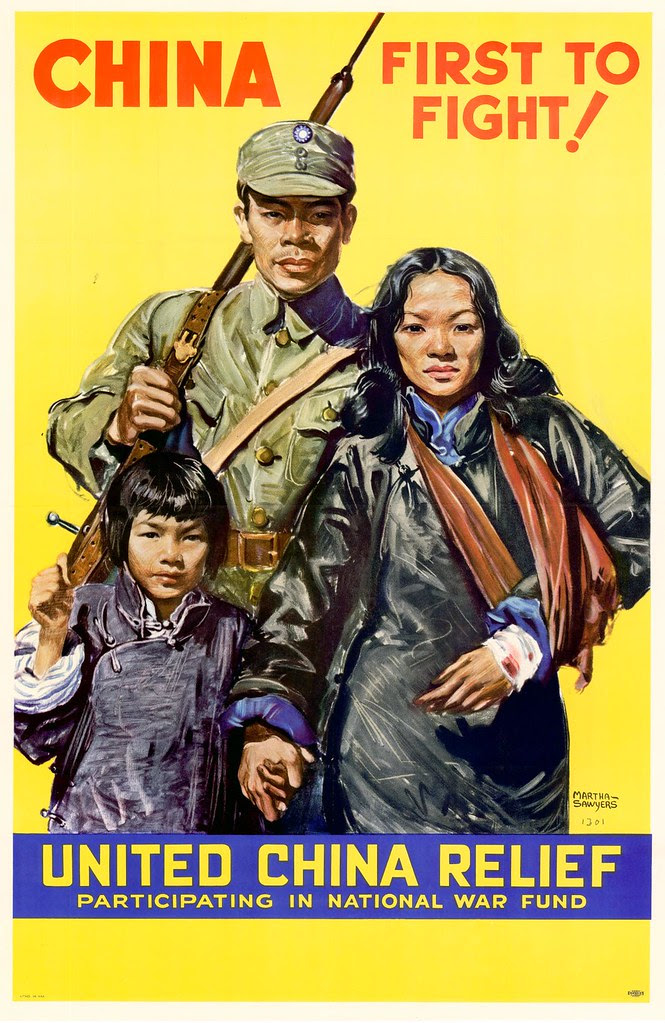 And so, without planning, Martha Sawyers became "an illustrator of Asiatic lore" - called upon by major clients of all sorts who required an artist who could handle the depiction of other races and cultures with passion and sensitivity. 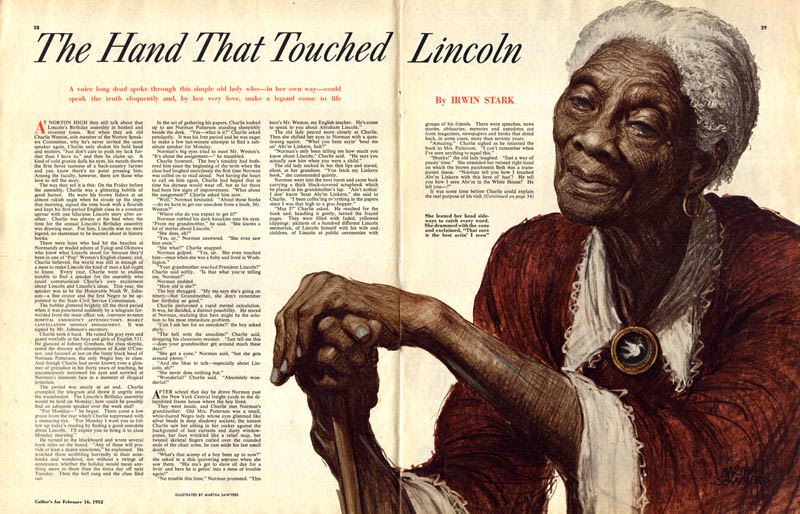 Martha Sawyers was a remarkable woman, described as follows in the catalogue that accompanied one long-ago show of her pastel drawings:

"Martha Sawyers came out of the heart of Texas... she brings us a bright picture of the other side of the earth, unbelievable peoples and places." 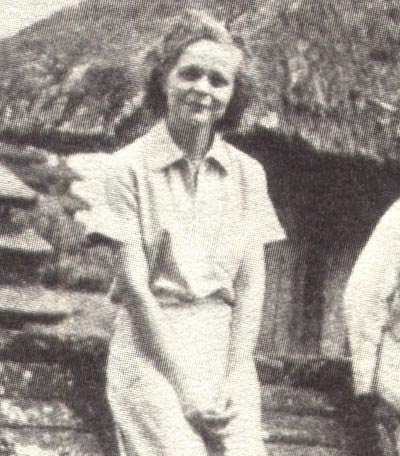 "Only a great love for these could have exacted the hundreds of paintings asiatic-oriental. Hard work that perfected a technique and color brilliant and authentic." 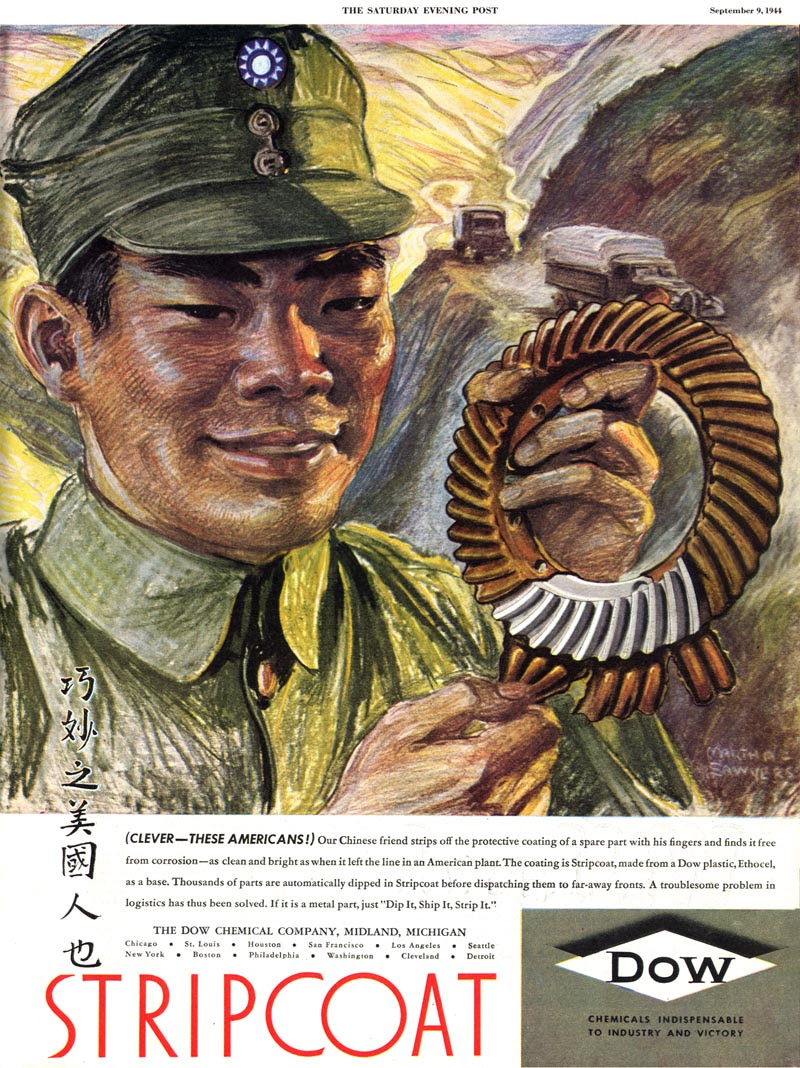 The other day I received the generous contribution of this portrait of Gilbert Bundy, courtesy of his nephew, Jeff Holloway. Bundy was a war artist with the U.S. Army in the Pacific theatre during WWII. He experienced horrific frontline combat first hand on many of the most infamous beaches while accompanying the advancing American troops.

This piece being dated 1944, one has to wonder if Bundy and Sawyers meet by chance while they were both stationed in those embattled regions of the Far East? 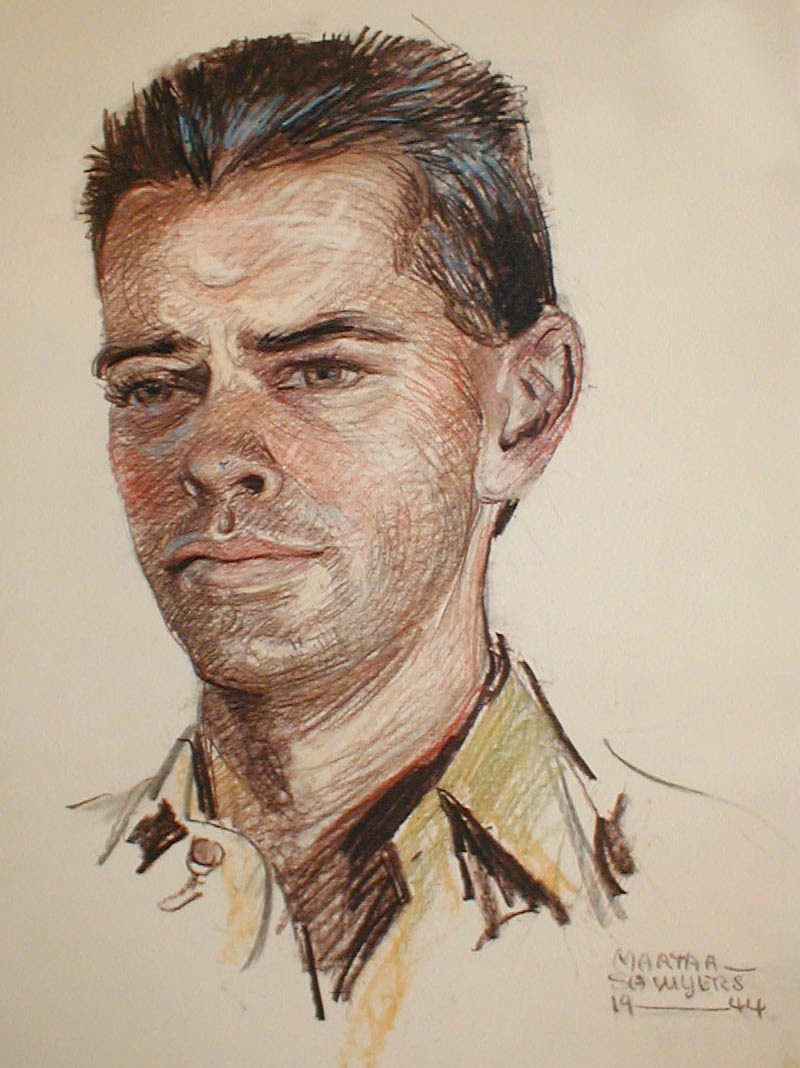 In the book, "Forty Illustrators and How They Work", we learn that Martha Sawyers studied with George Bridgman and George Luks at the Art Students League. Luks was a painter of "broad luscious brush-work" but Sawyers' approach was, we are told, more like that of a draftsman than a painter. It is suggested that she must therefore have "had greater sympathy for the teaching of Bridgman," the constructive anatomist. 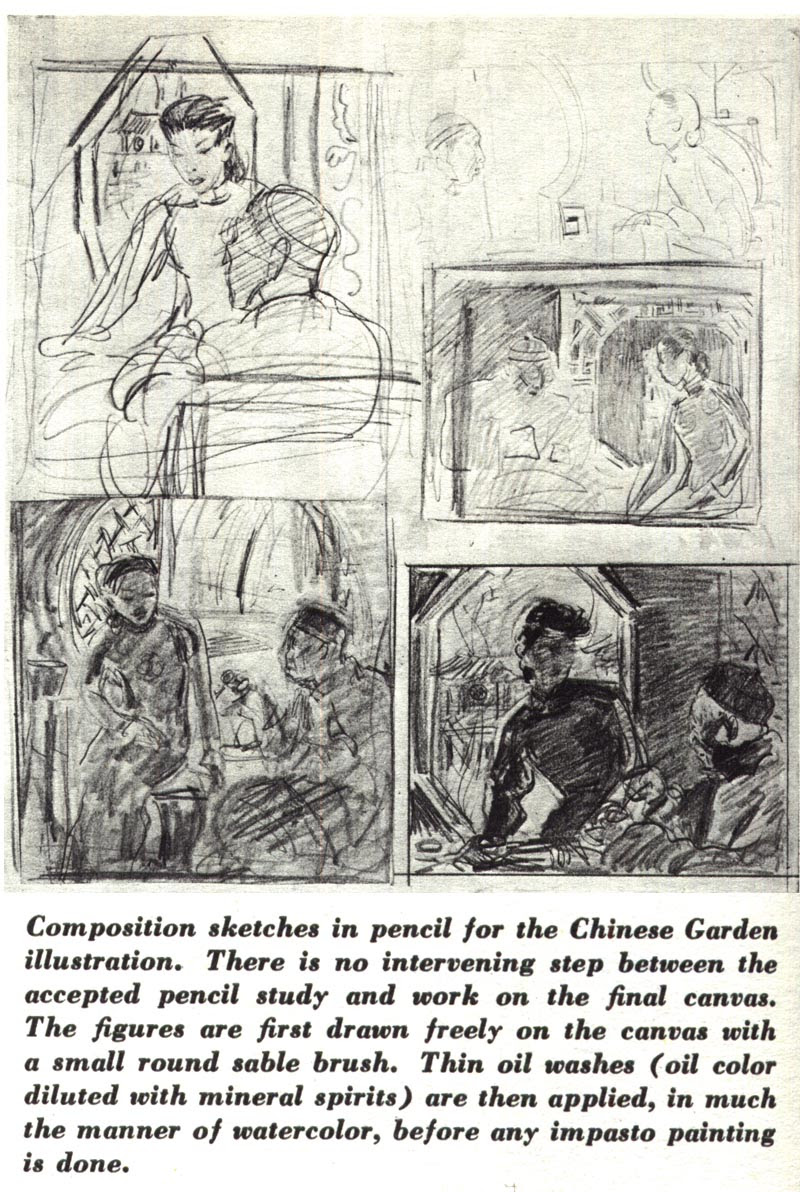 Sawyers' first job after graduating was in a studio that made stained glass. There she learned a technique of painting with a needle, scratching into flat colour to derive tonal variations. The artist transposed this technique to her illustration work: laying down thin washes of oil paint heavily diluted with mineral spirits to facilitate fast drying. She would then build up form with "crayon-like" brush strokes of those same thin, rapidly drying oils. 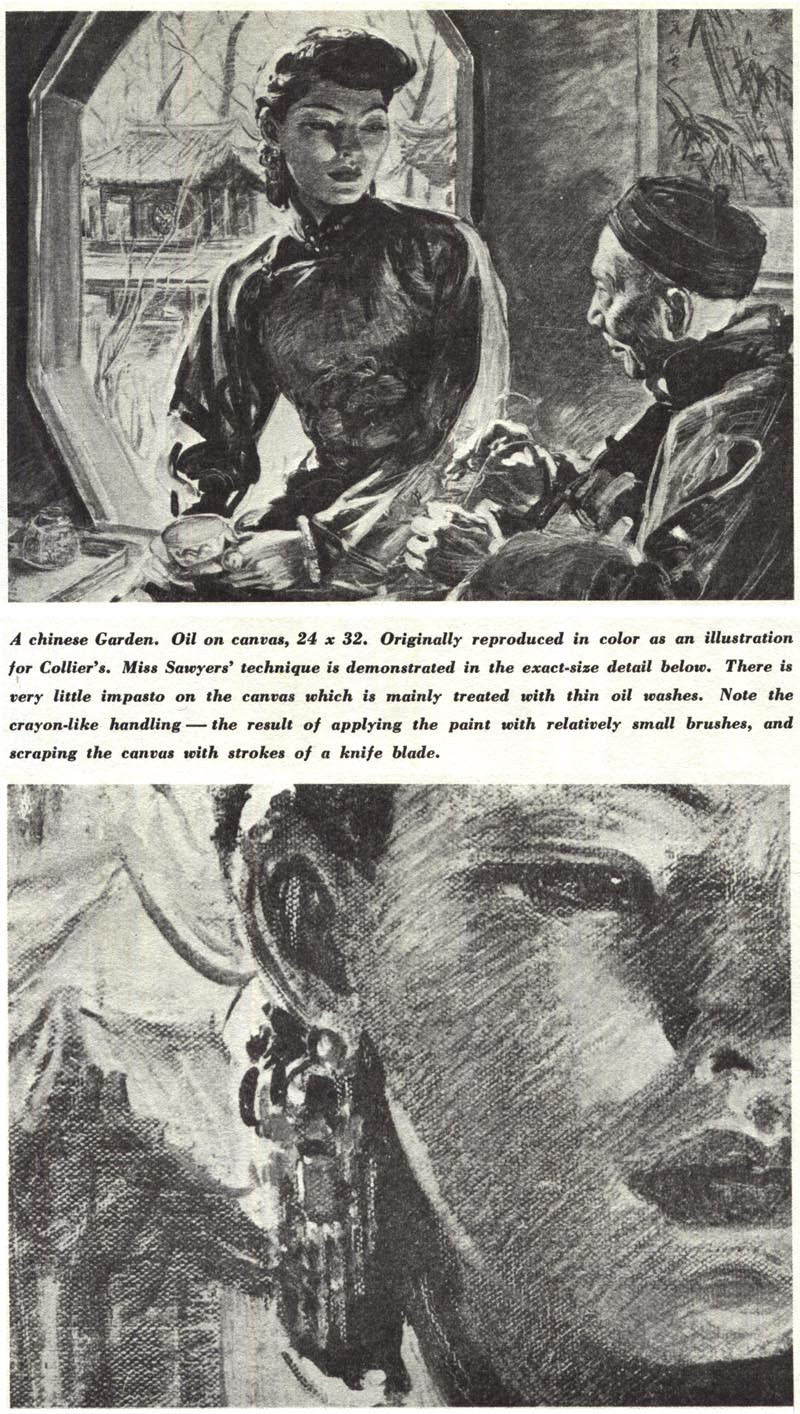 Finally (returning to her earliest professional experience in the stained glass studio) Sawyers would scrape through the dried colour layers of paint with a knife, revealing the canvas base colour. The result is the familiar textural look - a look almost of a pastel or crayon drawing - so typical of a Martha Sawyers illustration.

In early 1958, Martha Sawyers and husband Bill Reusswig once more felt the urgent pull of the Far East calling to them. They purchased plane tickets ($1,800 each) which were "good for a year and interchangeable with a dozen different airlines," and set out another adventure. 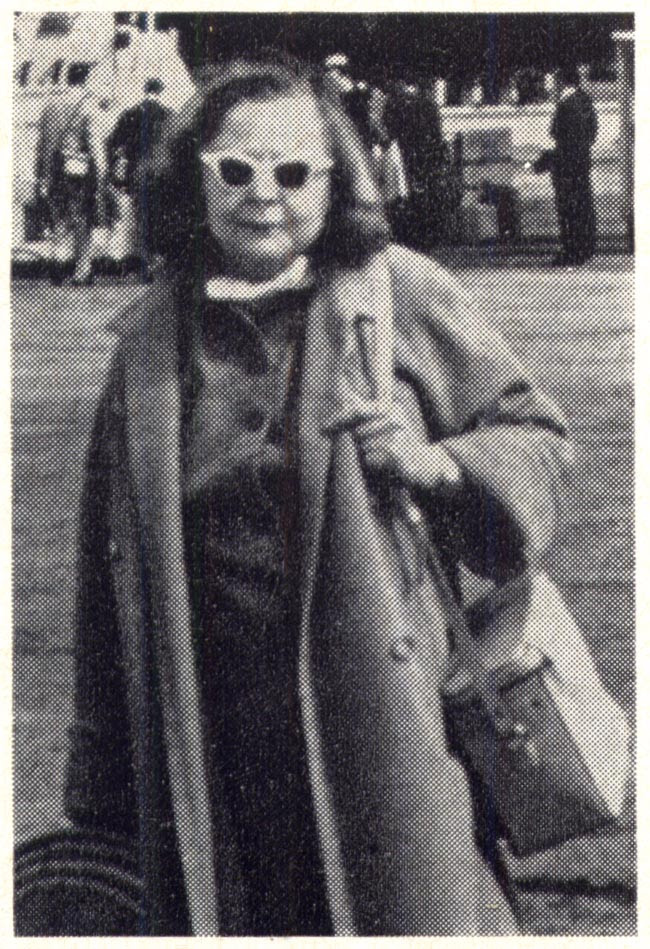 Writing for an article in the April 1959 issue of American Artist (just a little over a year after their return) Bill Reusswig reported, "The course was roughly planned but without reservations beyond Tokyo." 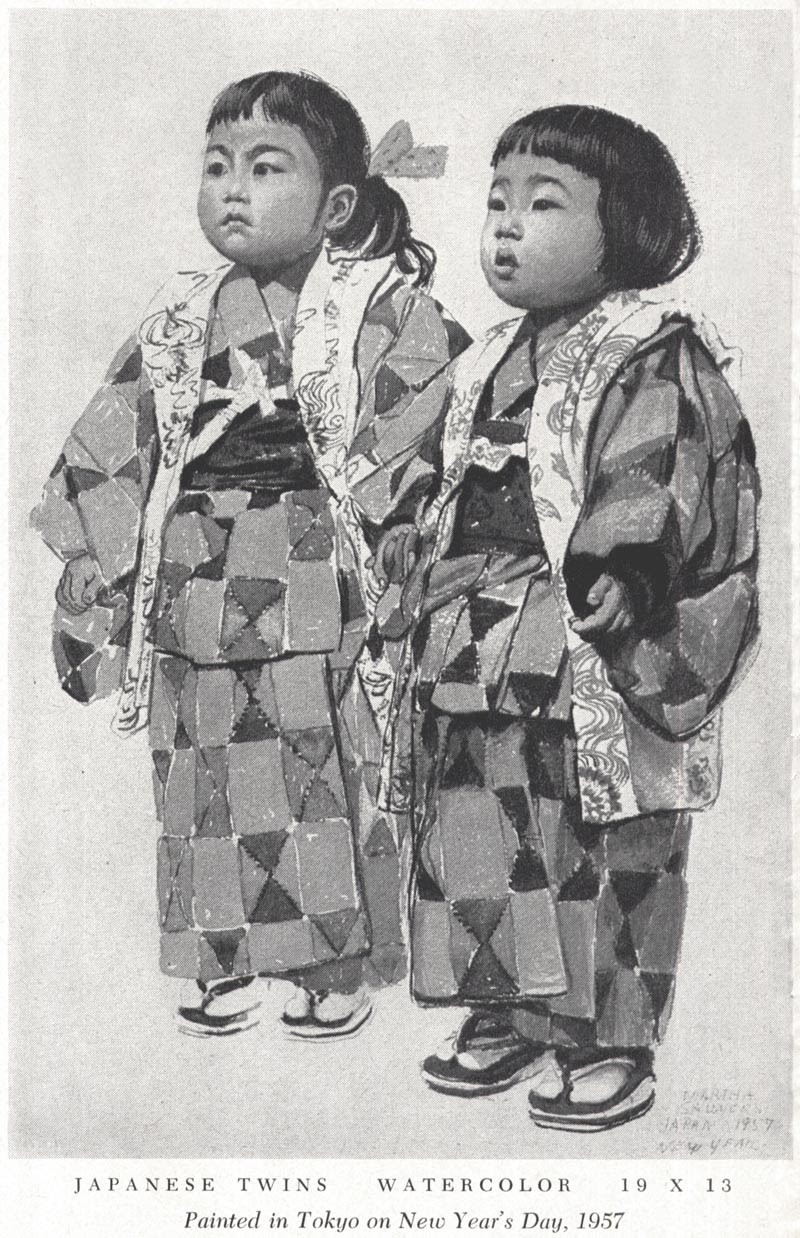 And what a course it was! The couple left their home in Milford CT, flew to San Francisco; then on to Honolulu, Wake Island, Tokyo, Hong Kong... 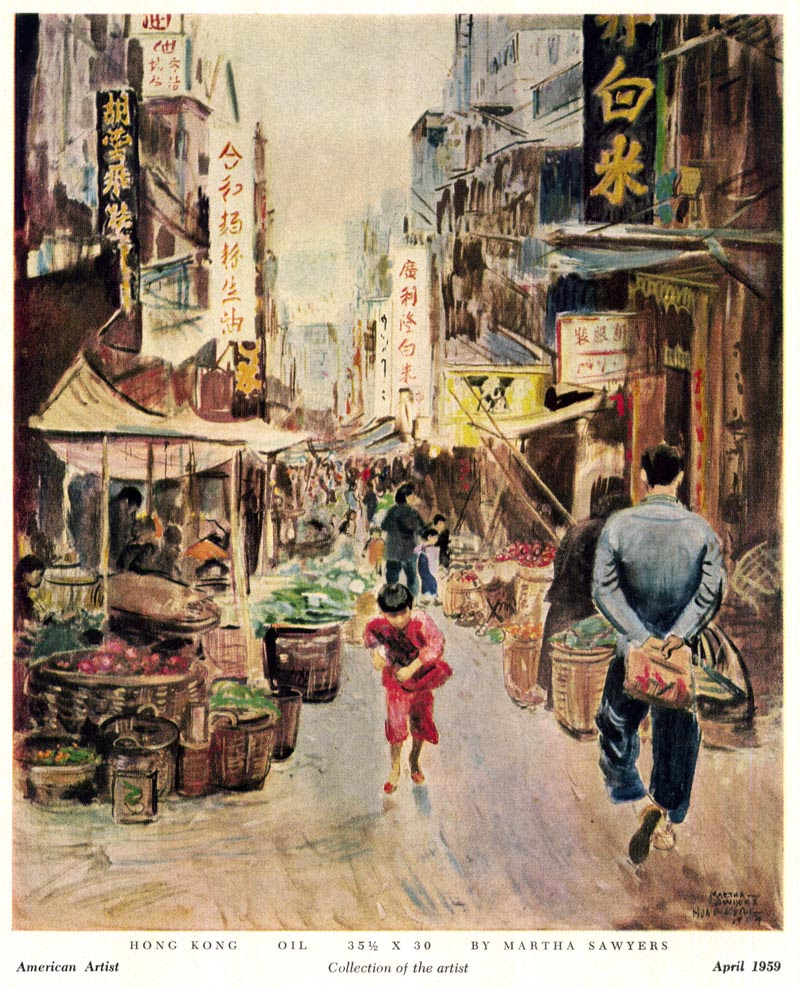 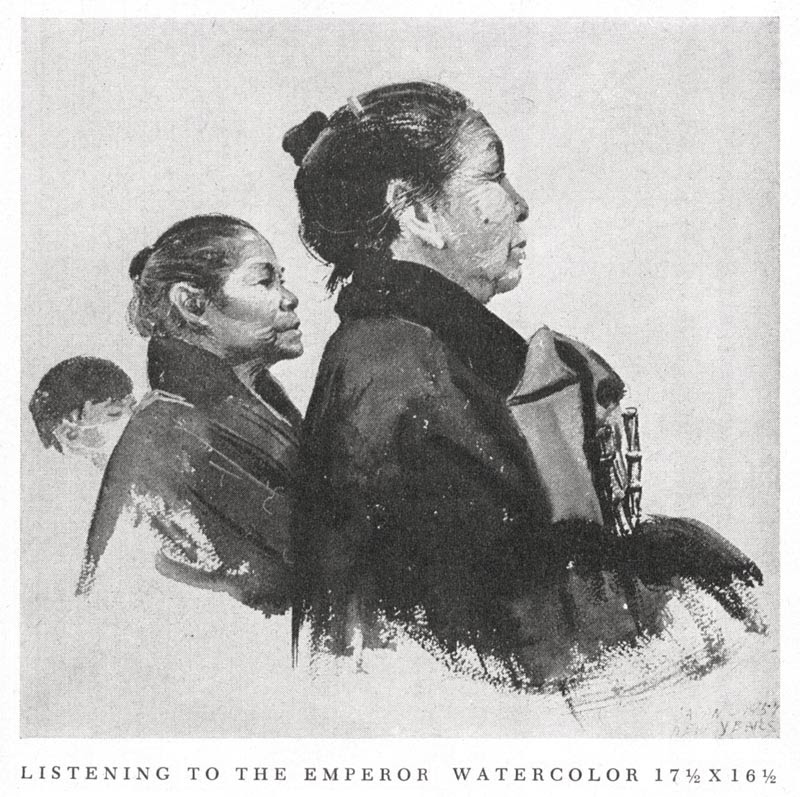 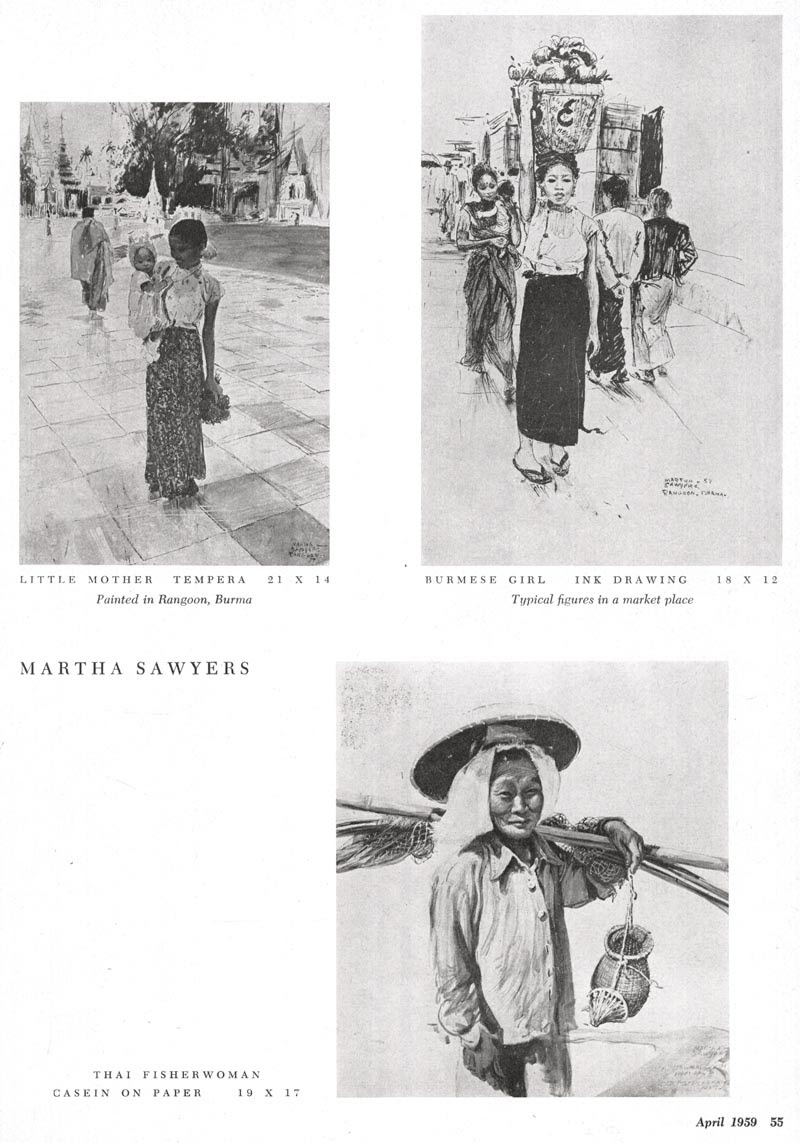 ... Istanbul, Athens, Rome, Paris, Madrid, Lisbon - and finally, after many long months and with bulging portfolios, by klipper ship back home to New York. 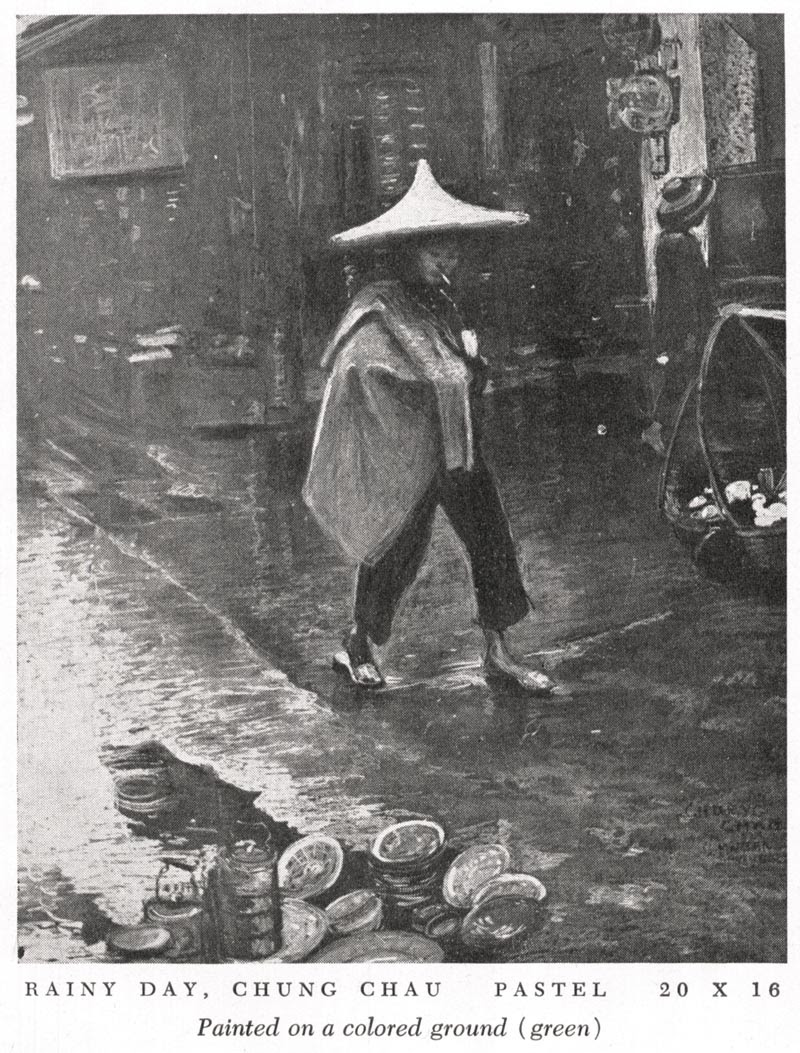 Reusswig said, "As we had covered a lot of this territory before, we wanted to feel free to 'follow the bend in the river'." 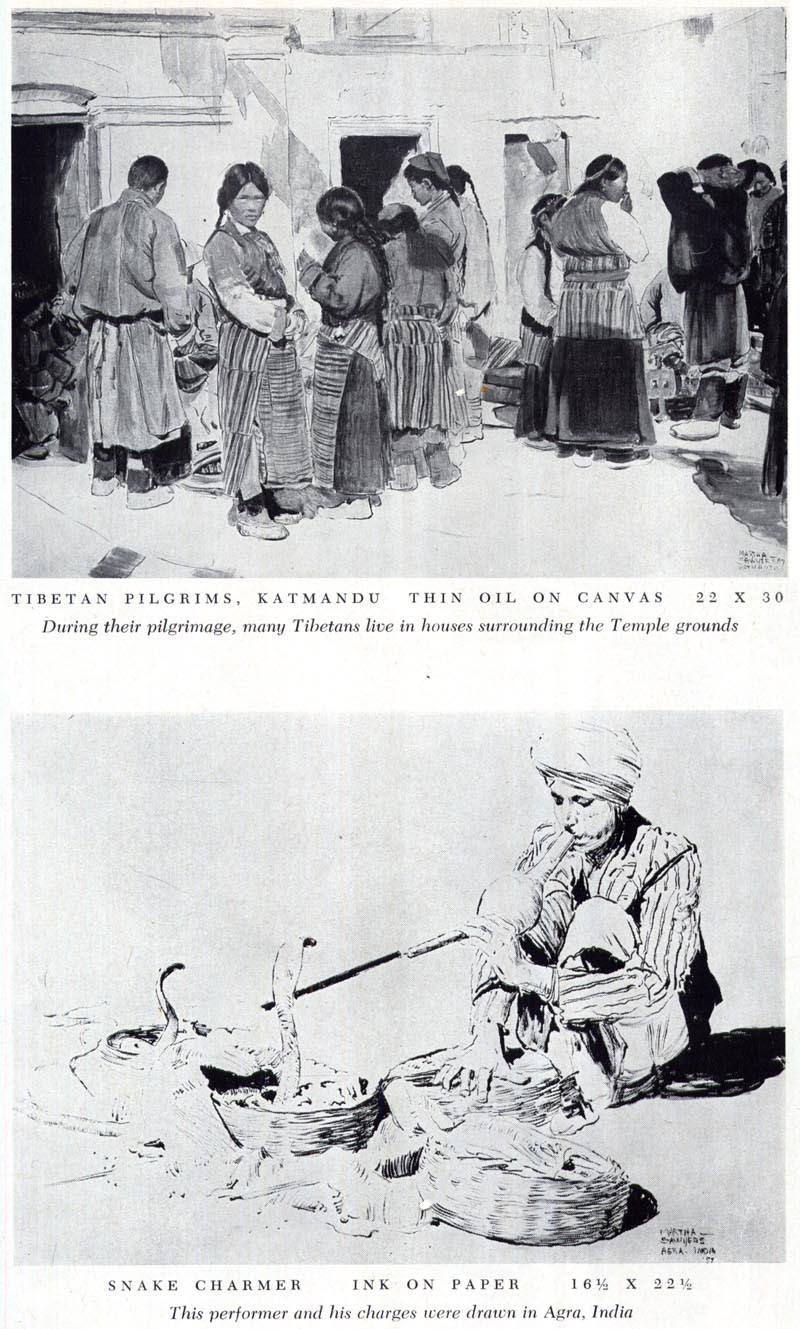 The couple often stayed in the humble homes of those who were the subjects of their drawings and paintings. Reusswig recounted, "Even though we did not speak their native tongue, a quick sketch was better than sign language. And even if you got lost, more often than not you could draw your way home."

These pieces are, I think, some of the best of Martha Sawyers work that I've seen. Even so, they barely begin to reflect the stories Reusswig describes in the article of the couple's year-long adventure! 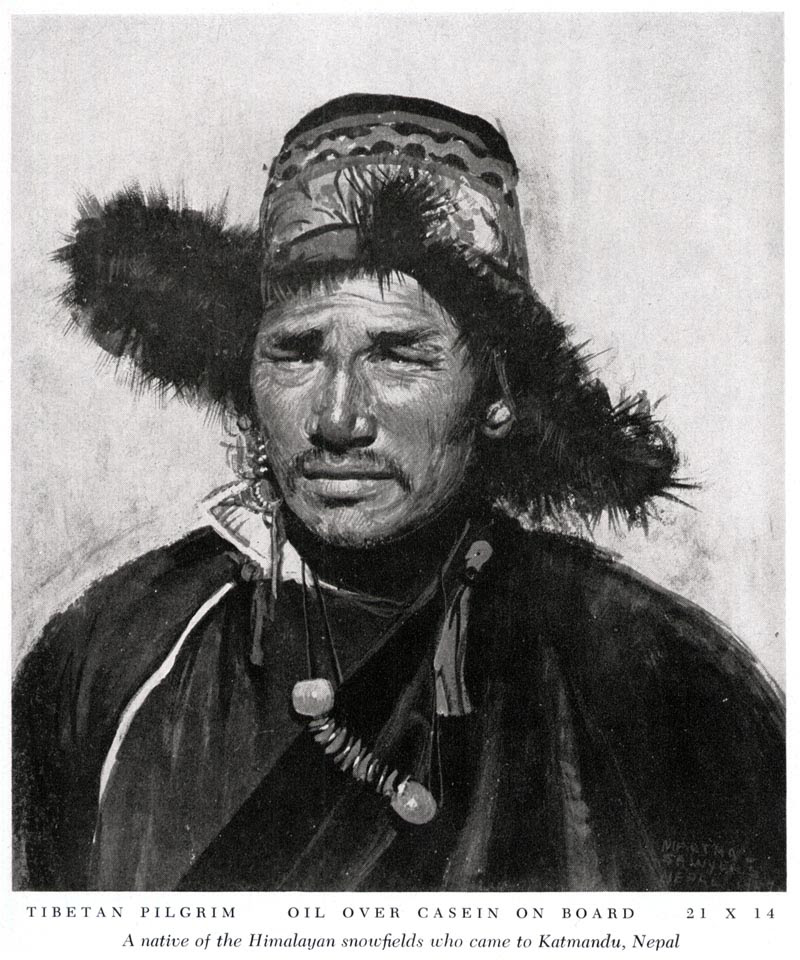 He concludes, "The whole trip was a wonderful experience, and in addition to the memories it will always excite, we brought back enough authentic pictures and sketches to feed on for many months to come." 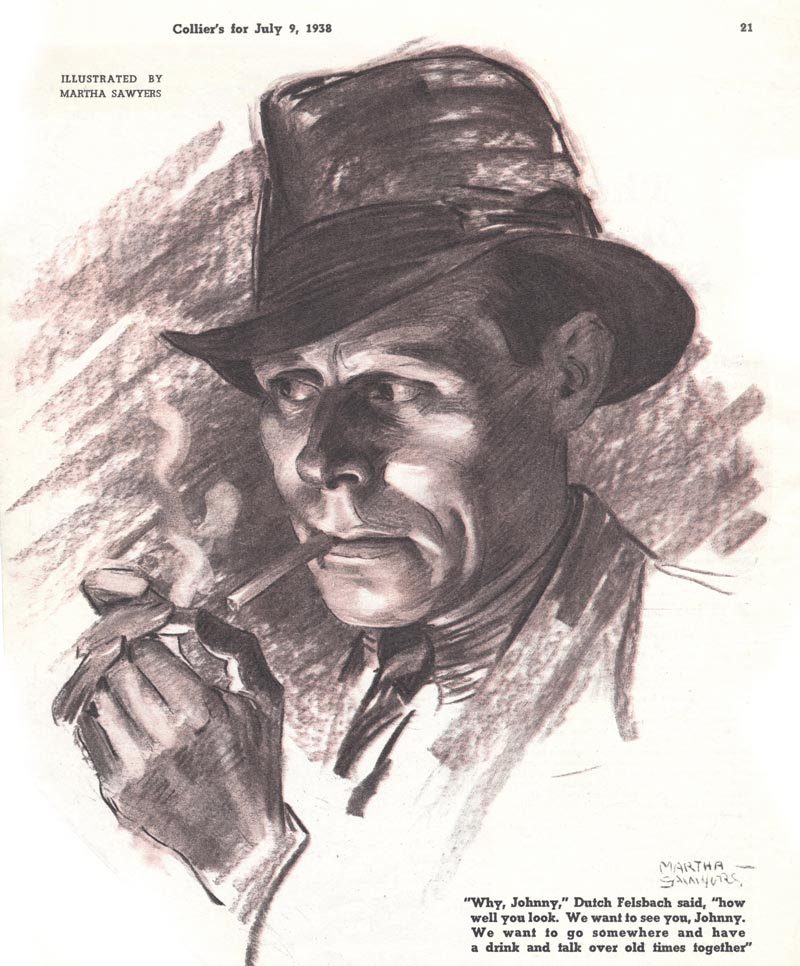 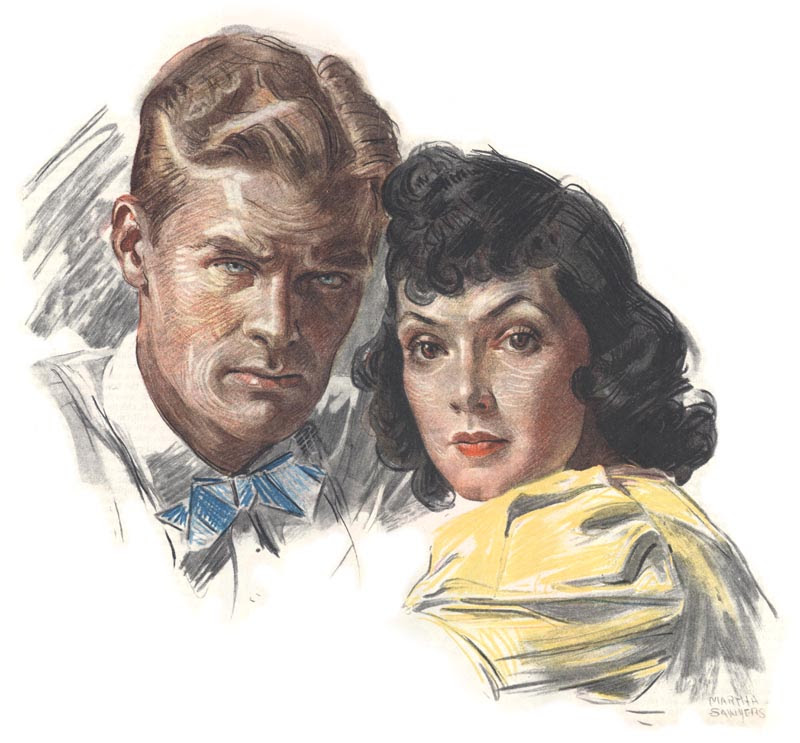 Fast forward three decades... here's the most current work I was able to find by Martha Sawyers, from Readers Digest Condensed Books, 1964. 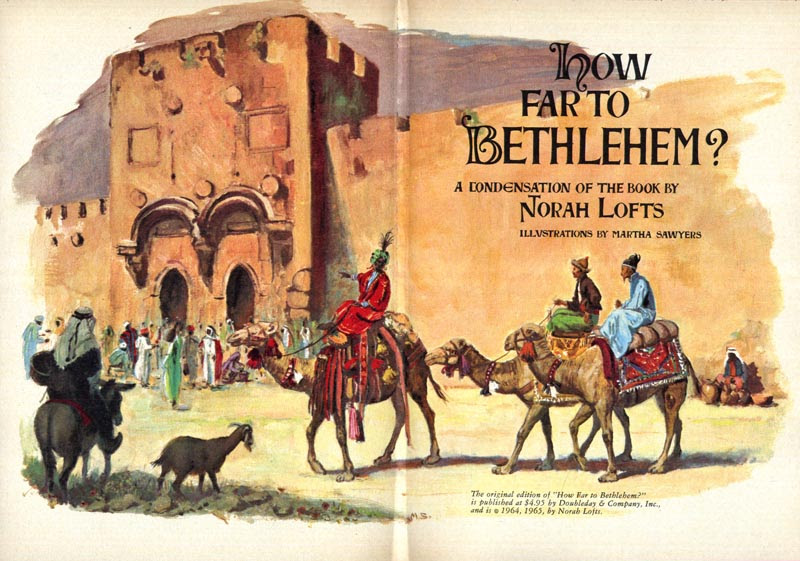 The editors must have felt Martha Sawyers was a natural choice for this version of the famous bible story of Mary, Joseph and the birth of Jesus. 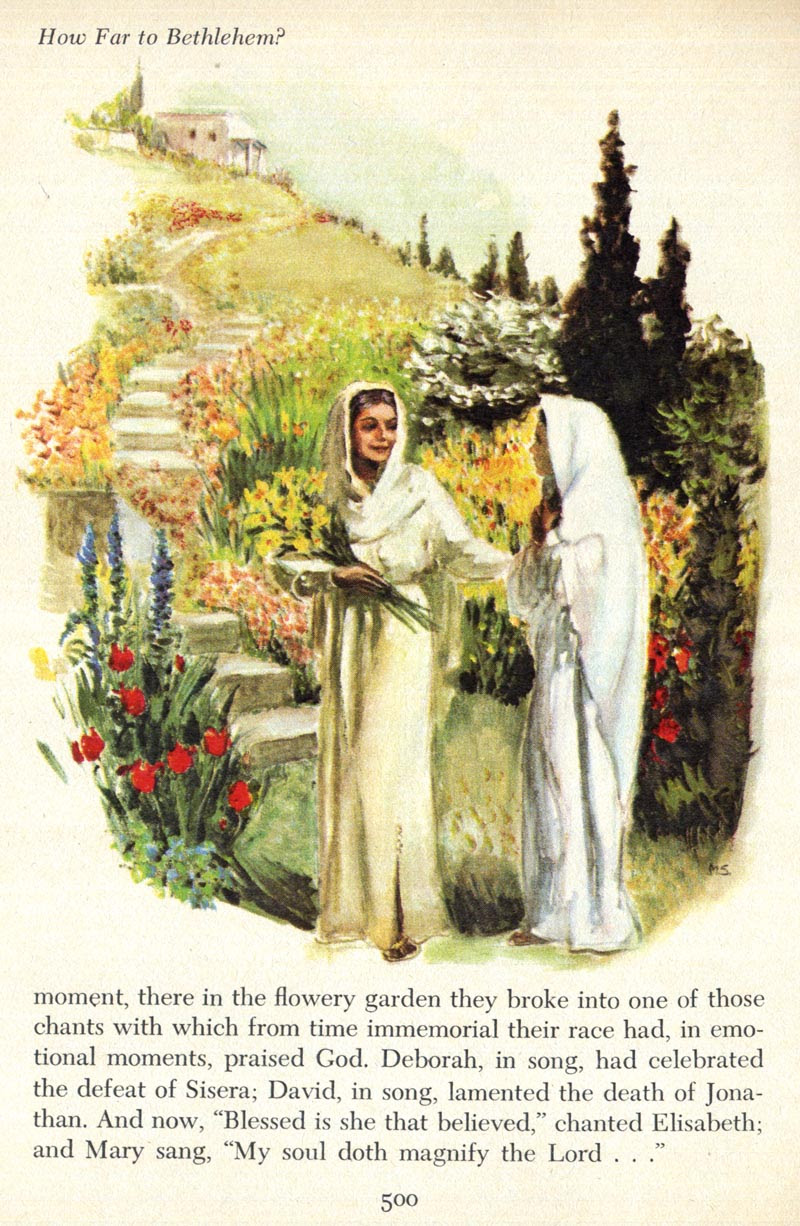 Having travelled extensively in these regions, and being considered a specialist in illustrating the people of Asia, Sawyers was no doubt completely comfortable with the assignment. 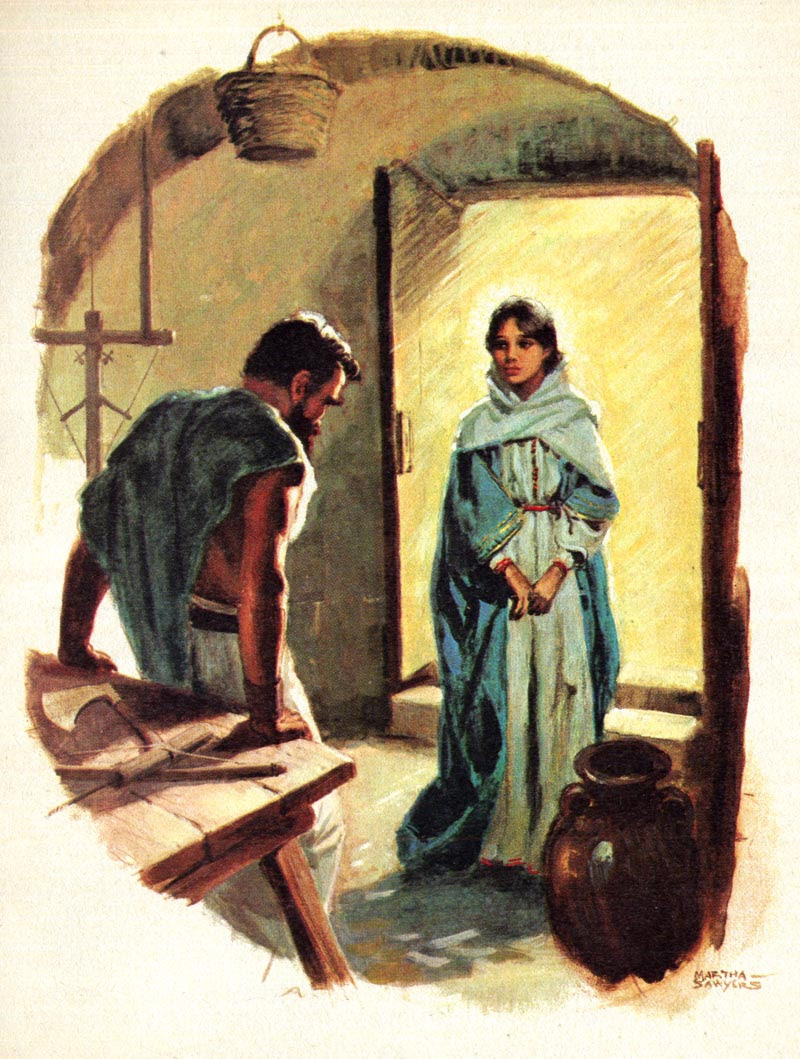 To research the people, places and costuming she would have had to look no further than those bulging portfolios of paintings and sketches mentioned by her husband in the American Artist article from April '59 - the accumulated wealth of that trip through all those many Eastern countries a year earlier. 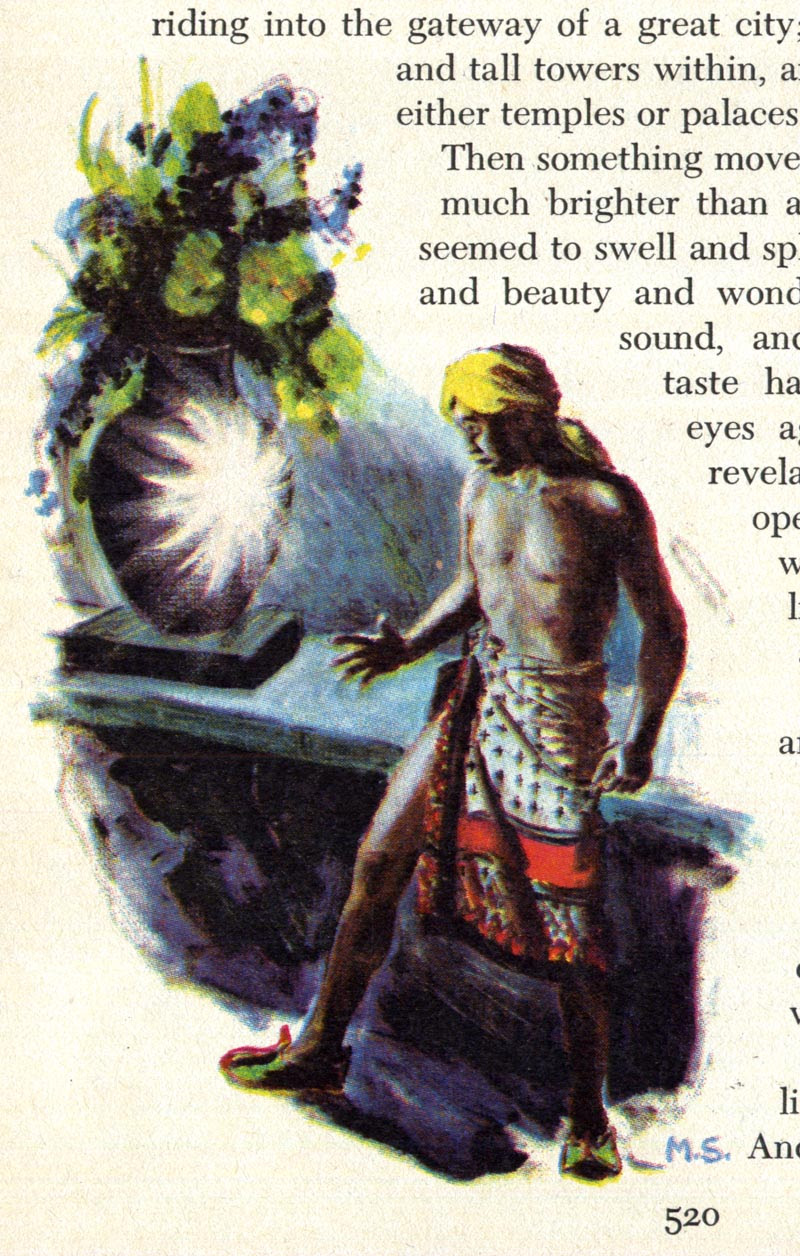 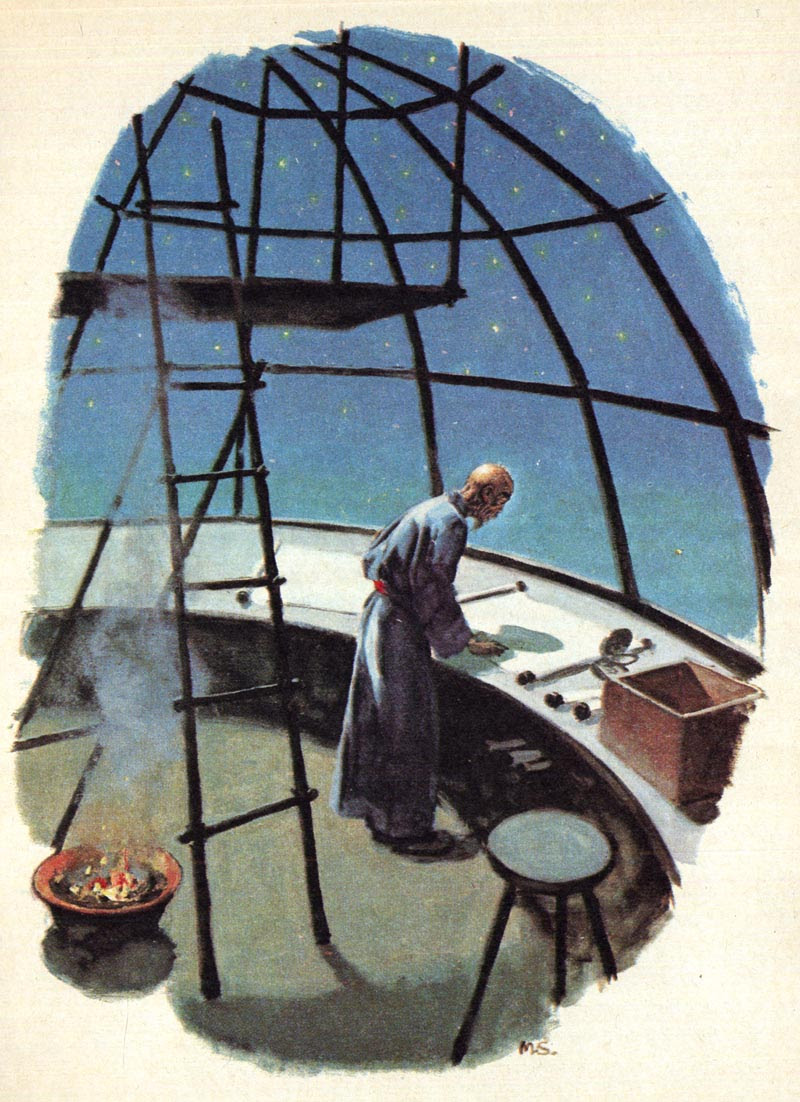 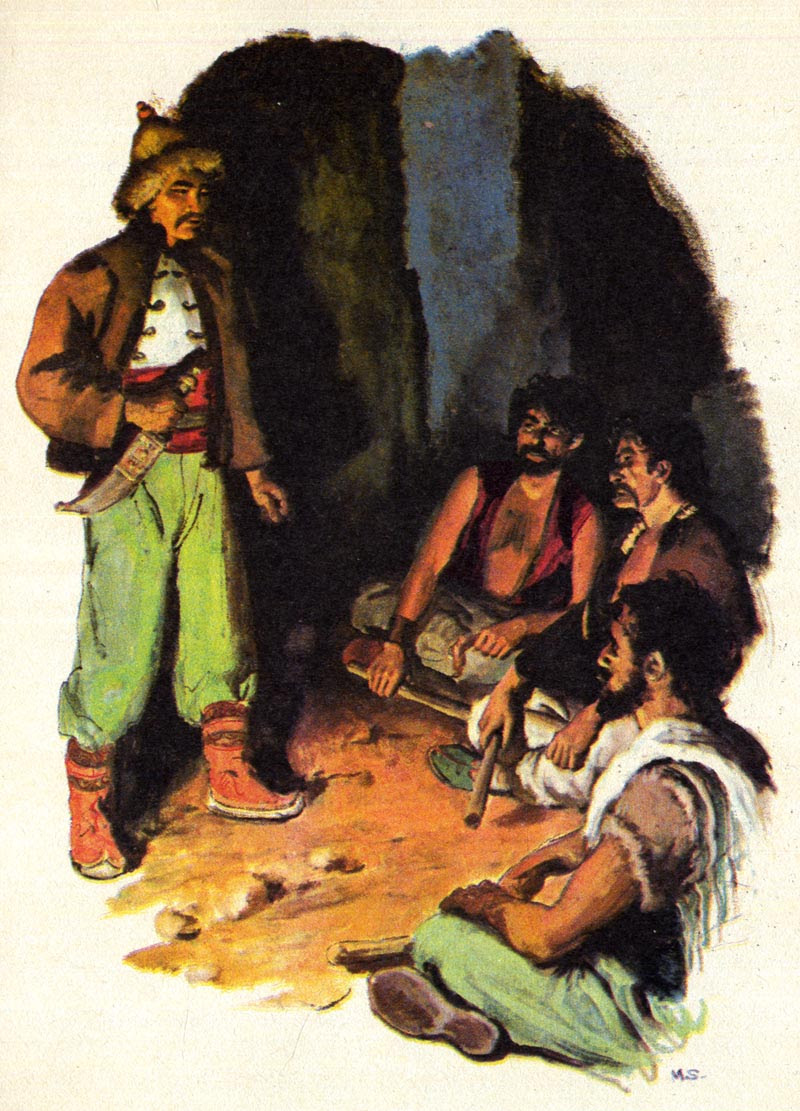 Its interesting to see where one ends up when one "follows the bend of the river"... 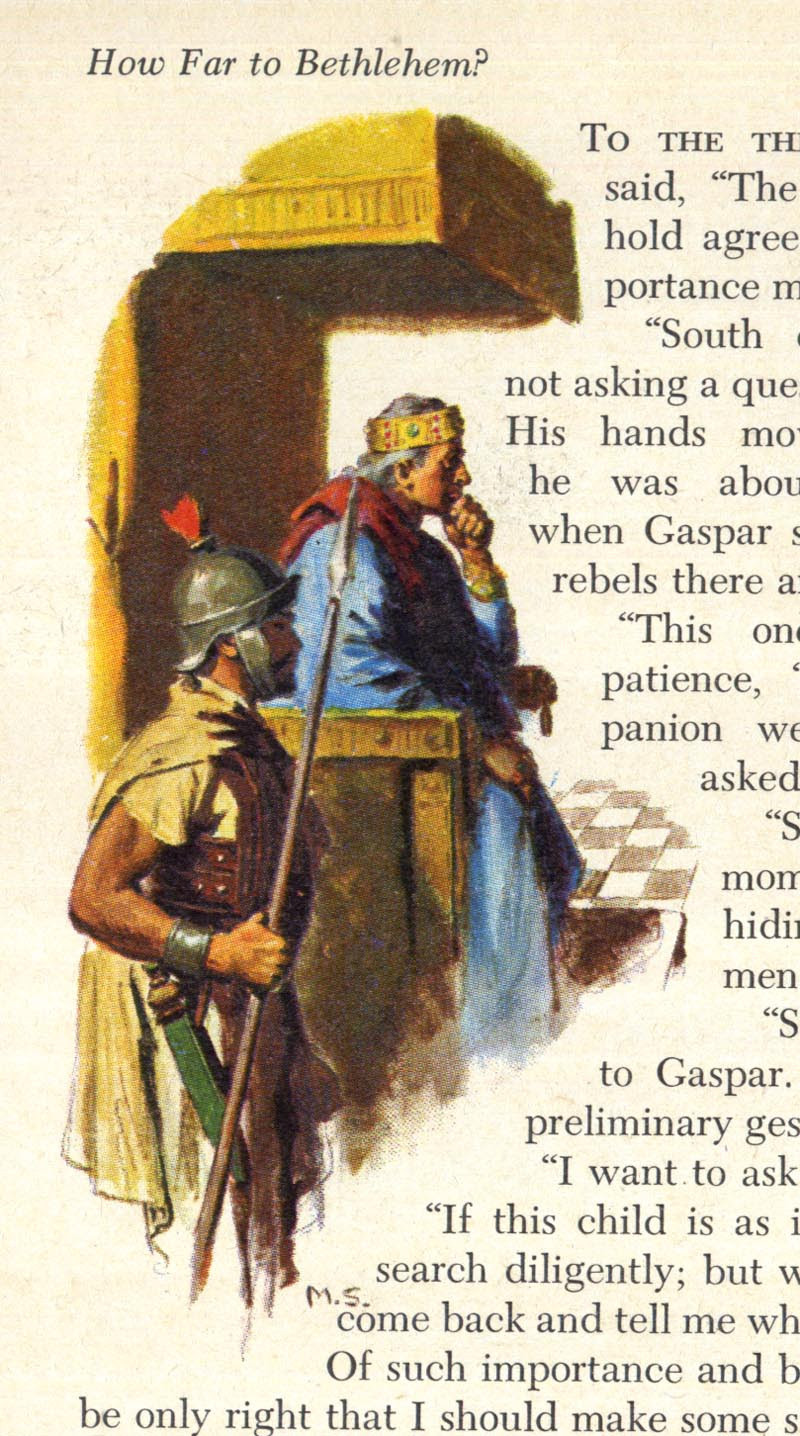 In the early days of the 20th century, a young girl in Cuero, Texas, fascinated by a book called "Religion of the Far East" began a life-long journey of artistic and cultural discovery... 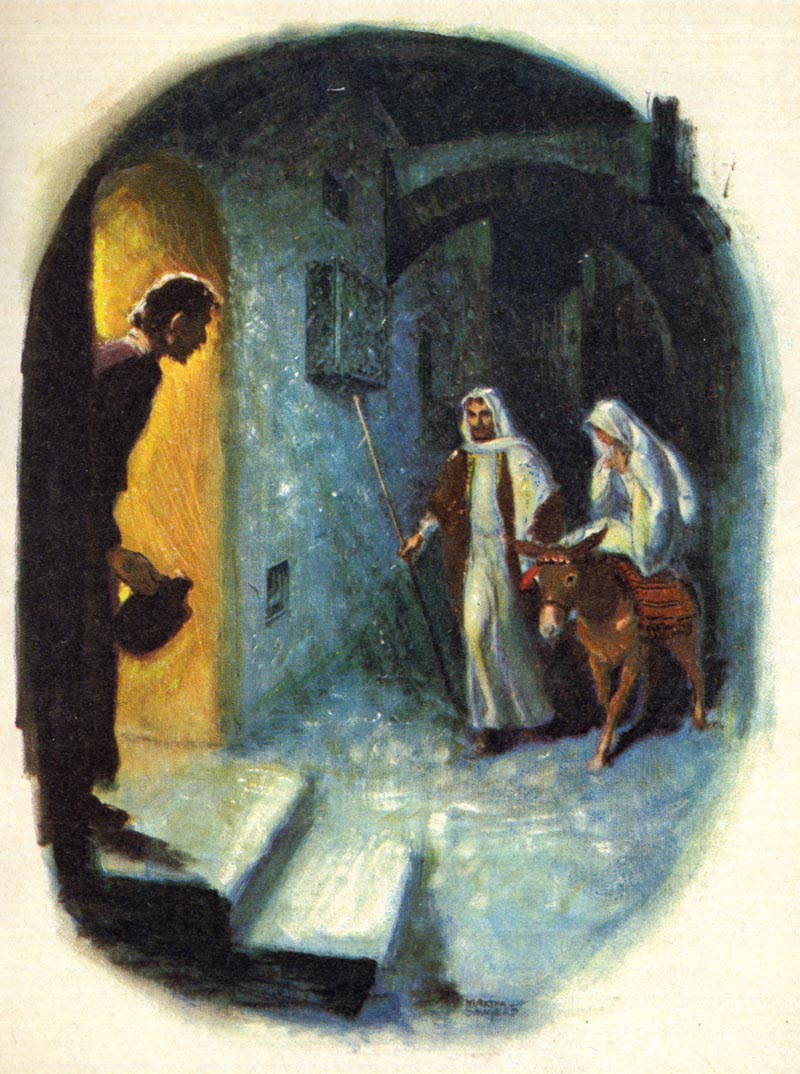 ... a journey that lead, six decades later, to an assignment illustrating the story that is the centerpiece of Western religion. 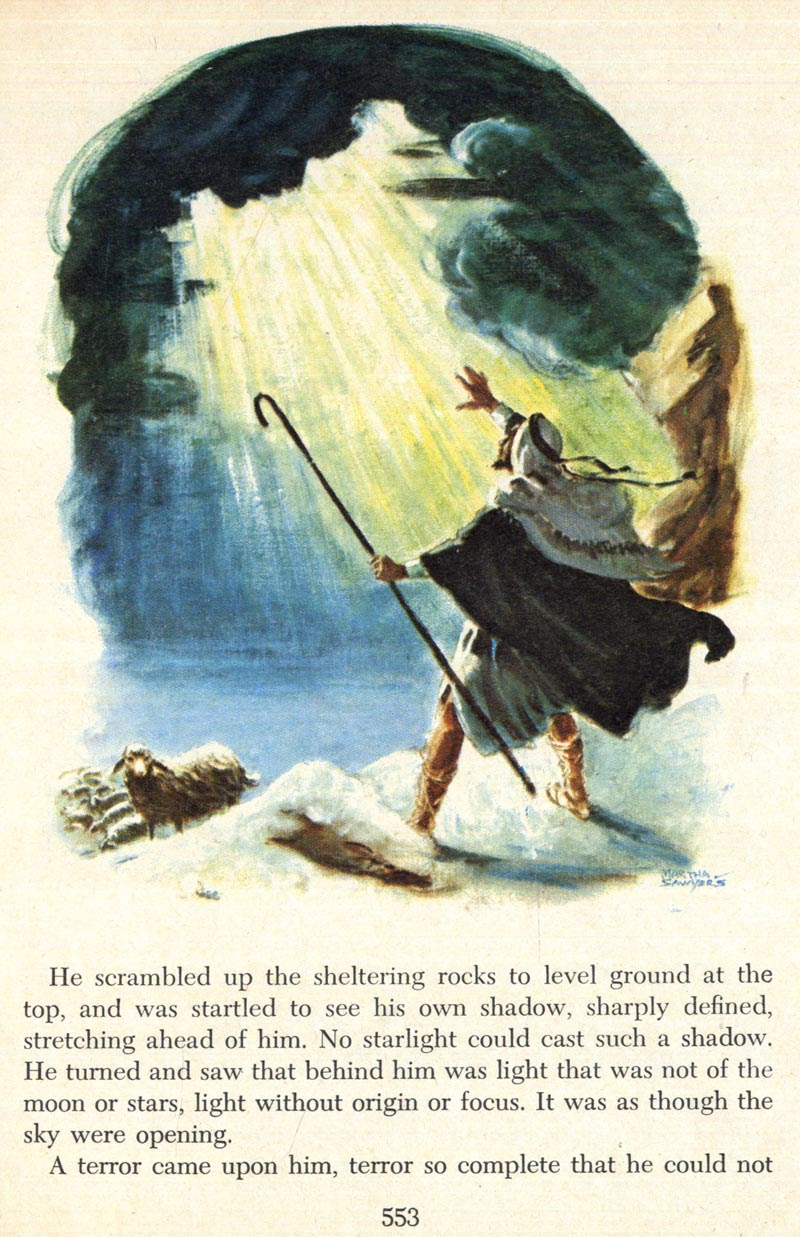 * My Martha Sawyers Flickr set.
Posted by leifpeng at 12:19 PM